Venus, a short film made in Vienna, Austria is screening on March 17, 2020 at the Alamo Drafthouse Cinema in Downtown Brooklyn (445 Albee Square West Brooklyn, NY 11201) as part of the Fulbright NY film series.

Venus is a silent encounter with the Anatomical Venus, an enigmatic 18th century wax model in the Josephinum Medical Museum in Vienna. Venus examines, explores, circles around, reveal and conceals the anatomical Venus.

The Anatomical Venus (originally named the Medici Venus, also referred to as the Medical Venus) is the centerpiece of a collection of 1,192 18th century Italian wax anatomical models kept in the Josephinum Medical Museum.  A life-sized model, she lies in a coffin of Venetian glass and rosewood lined with silk. From the top of her head, lush blond hair (human hair) held in place by a golden headband, to the base of her throat, over which rests a strand of pearls, she is sealed and serene, presented as an example of feminine beauty on display. A few inches below the pearls however, her chest is cut open, and her internal organs revealed. Medical students were able to disassemble her, into 281 pieces.

One afternoon when I was filming, a tour guide led a group in, saying “Look at the sleeping beauty, she is just waiting for her prince to kiss her and wake her up.” But she is not sleeping. Her eyes are wide open. Her head is tilted to the side, neck arched, and it has been written that she has an  expression “between ecstasy and agony”(1) and  performs the “idealization of the death agony of a young, beautiful woman, thereby capturing the essence of Eros and Thanatos.”(2) Paul Sonne, in a review of an exhibit at the Wellcome Collection in London featuring a small Venus writes that her “head  and expression resemble an angelic Renaissance saint.” The Venus in Vienna is calm and steady, gazing through and beyond the viewer. 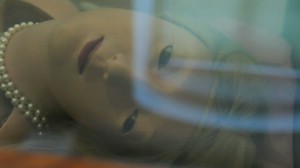